The 47 ronin attacks and kills Kira

After pretending for a long time that neither he nor any other ronin had any intentions of avenging their master, Ōishi determined that Kira had relaxed his security and could be successfully attacked by the sworn men. He snook out of Kyoto and met up with the other 46 men to make detailed plans for the attack. 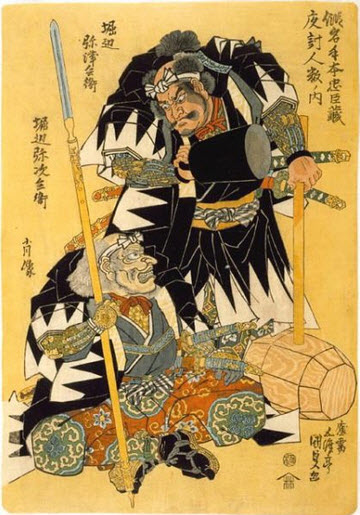 The men split up into two groups and attacked Kira’s mansion early in the morning on 14 December, 1702 (Genroku 15, 12th month). A group led by Ōishi attacked the front gate, while another group led by his son Chikara attacked through the back gate. Four men from Ōishi’s group scaled the fence and tied up the guard in the porter’s lodge, and archers were posted on the roof to prevent members of Kira’s household from running for help if they woke up. The ronin also made sure the neighbours knew that they weren’t robbers, just avenging ronins carrying out katakiuchi. It is said that the neighbors hated Kira and didn’t want to help him.

As the drum sounded, the ronin attacked from two different directions. Ten of Kira’s men prevented the ronins from entering through the front, but Chikara’s group successfully made it into the house through the back gate. Many of Kira’s retainers were sleeping in barracks outside the house instead of inside, and it took them a while to wake up and get into the house to defend Kira.

Kira woke up and hid in a veranda closet together with his wife and some female servants. By this point, Ōishi’s group had managed to get into the house and joined up with Chikara’s group, fighting Kira’s retainers together. 16 of Kira’s men were killed and 22 wounded, including Kira’s grandson. (Two more were killed before the attack .)

Ōishi checked Kira’s bed and found it empty but still warm, indicating that someone had been there very recently and that Kira had probably not managed to get very far away yet. Eventuality, some of the searching ronin found a hiding man who, upon discovery, attacked them with a dagger. The hiding man was easily disarmed, but refused to identify himself. The searchers were so sure he was Kira that they blew the whistle anyway, causing all the other ronin to come rushing in. When Ōishi held a lantern to the man’s face, he could see the scar from Asano’s attack.

Since Kira was of high rank and the ronin wished to uphold protocol, Ōishi kneeled before him and explained that they were Asano’s retainers and had come to avenge their master. He then urged Kira to commit suicide through seppuku, the honorable way to die, using Asano’s dagger. Ōishi also promised to be Kira’s kaishakunin, meaning that as soon as Kira had stabbed himself, Ōishi would behead him to prevent him from a slow and painful death.

Kira refused to obey. Eventuality, Ōishi therefore cut his head off with Asano’s dagger while some other ronin pinned him down.

Right after the death of Kira

After killing Kira, the ronin left the house, taking Kira’s head with them as planned. To prevent a fire in the empty house, they extinguished all lamps and fires before they left. 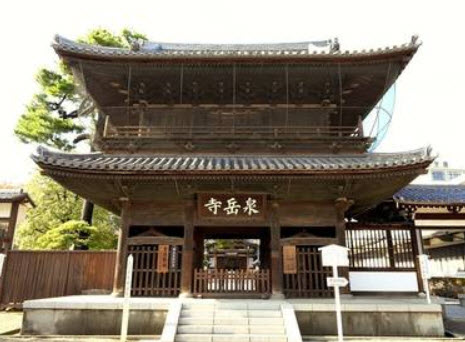 One of the ronin, a man named Terasaka Kichiemon, was dispatch to Akō to let the people there know of the revenge. (According to some versions of the story, Terasaka was not sent away as a messenger. Instead, he abandoned the group and ran away, either before of after the battle. There is also a version where Terasaka, who was very young, was ordered to escape before the other ronin turned themselves in.)

The 46 ronin walked to the Sengaku-ji temple where they washed Kira’s head in a well, before placing it – together with the dagger – on the altar by Asano’s tomb. They then prayed, before donating all their money to the temple’s abbot, asking him to bury them decently and offer prayers for them.

Now, the 46 ronin turned themselves in to the authorities. They were separated into four groups and put under the responsibility of four different daimyo.

Two of Kira’s son’s retainers visited the temple and collected his head to bury it. The reciept that they had to sign to get custody of the head is still preserved in the temple to this day.