The 47 ronin plan their revenge

In part 1 of this story, we learned about how Lord Asano assaulted a court official in the Edo Castle and was sentenced to seppuko. Upon his death, his family’s lands and goods were confiscated by the authorities, and the people who used to work for Asano and his family became unemployed and masterless.

On this page, you can learn more about how some of Asano’s retainers refused to accept his death and swore to avenge him – against the direct orders of the mighty shogun.

Out of Asano’s 300+ retainers, 47 men – including the samurai leader Ōishi – refused to allow their lord to go unavenged, even though the suicide had been ordered by the shogun and revenge was specifically prohibited in the case. These 47 men swore a secret oath to kill Kira, even though they would be sentenced to death for murder.

Attacking Kira soon after Asano’s death would have been unsuccessful, since the shogunate authorities were fearful of such a strike and had taken extra precusions. The 47 ronin understood that they would have to wait until the authorities had become more relaxed. To facilitate that, they dispersed and became monks, workmen or merchants.

Ōishi, the leader of the sworn 47, moved to Kyoto where he started acting in a way that made it seem as if honor and revenge was the last thing on his mind. He drank a lot alcohol publicly and frequented taverns and geisha houses, and had to endure both ridicule and physical abuse for being such an undignified former samurai. 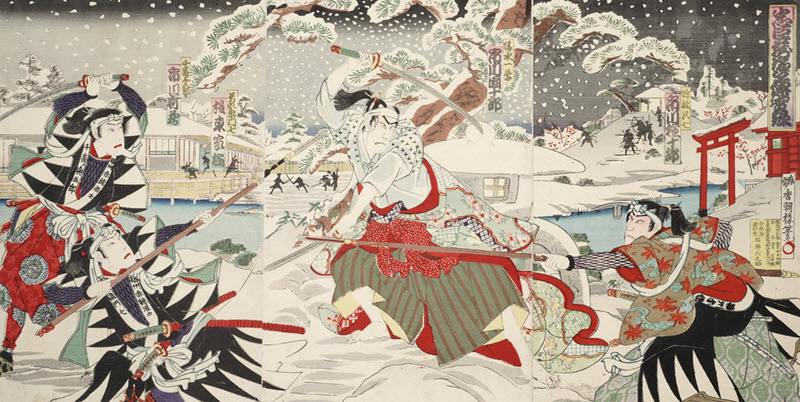 Ōishi also divorced his wife, to protect her and their children from coming to harm after the revenge. He sent her and the younger children to live with her parents, while the oldest son Chikara was allowed to chose between going with her or remaining with his father. Chikara chose the latter.

When a year and a half had passed since Asano’s death, Kira’s spies still had nothing of interest to report, except for Ōishi’s horribly bad behaviour in Kyoto. Clearly, Asano’s retainers were all either lazy and disloyal, or actually respecting shogun’s decree about not avenging their master. Either way, Kira began letting his guard down.

Now, the second stage of the great scam took place, as sworn men used their new roles as workmen and merchants to nestle their way into Kira’s mansion. They became familiar with the outlay of the place and paid attention to the routines and charactistics of those within. One of the ronin, a man named Okano Kinemon Kanehide, even married the daughter of the builder of the mansion, and thereby obtained detailed plans for the mansion’s design.

As this was going on, other ronin were secretly obtaining weapons and smuggling them into Edo, which was, of course, absolutely against the law. The armour that they would wear was home-made, as they didn’t wanted to risk causing suspicion by purchasing it.