The revenge of the 47 rōnin

The revenge of the 47 rōnin took place in Japan in the early 18th century. A group of samurai became leaderless (i.e. rōnin) when their feudal lord (their daimyō) Asano Naganori was compelled to perform seppuku (a type of ritual suicide) for attacking a court official named Kira Yoshinaka. After biding their time for over a year, the 47 rōnin avenged Asano by killing Kira. As a consequence, 46 of them were ordered by the Shōgun to commit seppuku. 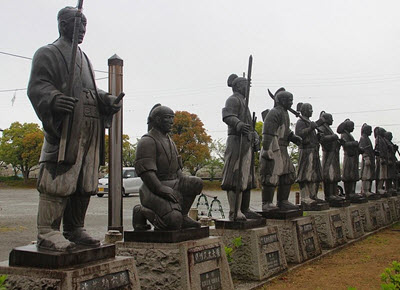 This controversial event, which is an actual historical event, quickly formed the basis for numerous plays in Japan. Today, it is one of the most well-known Japanese stories, and it often used as a base for discussions regarding concepts such as loyalty, persistence, honor, and sacrifice – values seen as essential to traditional Japanese culture. The revenge of the 47 rōnin is considered one of the more significant events of the Genroku era.

Both Asano Naganori and the rōnin are buried at Sengaku-ji, a Sōtō Zen Buddhist temple near Sengakuji Station and Shinagawa Station in Tokyo. On 14 December each year, a festival is held there to commemorate the event. After killing Kira, the rōnin took his head, washed it in a water well and presented it on the altar in front of Asano’s tomb at the temple.

The revenge of the 47 rōnin event is also known as Akō-rōshi (赤穂浪士), which means the Akō incident.

When did this event happen?

Who was the leader of the 47 rōnin?

Ōishi Yoshio (大石 良雄), who was the karō (chamberlain) of the Akō Domain in the Harima Province. He is often referred to by his title, Ōishi Kuranosuke (大石内蔵助). He lived from 1659 to 1703.

Some films and television programs are quite faithful to the historical events or the early plays, while others are more flexible and use the story as inspiration rather than re-telling it.

Japanese name for fictionalized accounts in Japanese that relate to the 47 rōnin event is chūshingura.

The story of the 47 ronin is one of the most commonly occuring themes for ukiyo-e (Japanese woodblocks prints), and many well-known woodblock artists have depicted either the historical events or scenes from famous plays. The great ukiyo-e master Utagawa Kuniyoshi (1 January 1798 – 14 April 1861) made at leat seven separate complete series on this subject.

Examples of 47 rōnin on stage

The first play (the title translates to “The Night Attack at Dawn by the Soga”) appeared just two weeks after the death of the rōnin. It was shut down by the censors, but other stage productions about the event cropped up throughout Japan and eventually also in other parts of Asia.

One of the most famous plays about the event is the bunraku puppet play “Kanadehon Chūshingura”, written in 1748 by Takeda Izumo and his associates. It was later adapted into a kabuki play, which is still performed in contemporary Japan. One of the reasons why Kanadehon Chūshingura could become such as success was that it was set in the 14th century, during the reign of Ashikaga Takauji, and the names of the characters were altered in (more or less dramatic) ways. This made the play less irksome for the authorities.

The opera Chūshingura by composer Shigeaki Saegusa premieered in 1997. The libretto is by novelist Shimada Masahiko.

A ballet called The Kabuki, created by choreographer Maurice Béjart in 1986.

Examples of 47 rōnin on the silver screen

One of the oldest Japanese Chūshingura movies was made in the early 20th century, starring Onoe Matsunosuke. It’s exact release year remains unknown, but it was at some point between 1910 and 1917. It is a silent movie, intended to be shown with accompanying benshi narration.

Here are a few other examples of movies based on the revenge of the 47 ronin.

Examples of 47 rōnin on TV

A long row of Japanese TV-shows are based on the story of the 47 ronin, including single programs, mini-series, season-long series, and year-long series. There is for instance the 52-part television series Daichūshingura from 1971.