The final resting place for the 47 ronin, and their master Asano, is the grounds of the Sengaku-ji temple in Tokyo.

After the ronin had killed the court official Kira as revenge for master Asano’s death, they washed Kira’s head in a well and placed it at the altar by Asano’s tomb at the Sengaku-ji temple. The head was not left there for long however, as Kira’s son quickly sent two servants to retrieve it.

46 of the ronin were sentenced to committ seppuko, which they did on the 4th of February, 1703. They were buried next to their master. The 47th ronin was pardoned by the Shogun and lived a long life. When he finally died at the age 87, he was buried with the other 46 ronin.

Ever since the Genroku era, when the revenge of the 47 ronin took place, people have been coming to the graves of the ronin to pray and show their veneration. Each year on 14 December, the day the ronin avenged their master in 1702, a festival is held at the temple to commemorate the event.

The Sengaku-ji temple is located in the neighborhood Takanawa, which is a part of the special ward Minato-ku in Tokyo. The closests railway station is the one named after the temple: Sengakuji Station. The large Shinagawa Station, which is an important travel hub, is also fairly near.

Sengakuji Station (泉岳寺駅 Sengakuji-eki) is operated by the Tokyo Metropolitan Bureau of Transportation, but also serves as the northern terminus of the Keikyu Main Line (operated by Keikyu).

Sengakuji Station is served by the following lines:

Objects related to the 47 ronin kept in the temple

A lot of objects related to the 47 ronin are preserved in the temple, including clothes and the armour that they wore on the day of killing Kira. After bringing Kira’s head to the temple, the 46 ronin (one had been sent away as a messenger to Asano’s home region) donated their belongings to the temple before turning themselves in to the authorities. 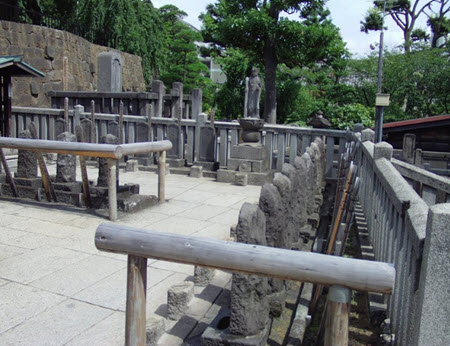 The garves of the 47 ronin at Sengaku-ji temple

The armour their wore were home-made, since purchasing armour could have drawn attention to their secret plan of killing Kira.

The drum used to coordinate the attack on Kira’s mansion is still in the temple, and so is the whistle that were blewn to signal that Kira had been apprehended.

The temple also holds the banner that the ronin posted during their attack, and the receipt that a temple priest wrote out and Kira’s son’s servants had to sign to retrieve the head.

Several original letters related to the event is also kept in the temple.

The grave of the repenting man

A man who once ridiculed the ronin leader Ōishi and kicked him in his face is buried next to the 47 ronin and Asano.

After the death of their master Asano, the ronin dispersed, and Ōishi moved to Tokyo where he started living a life of sin and debauchary to make Kira believe that he was a lazy scoundrel who had no intention of avenging his master.

One time, when a drunken Ōishi had fallen asleep in the street, a man mocked him, spit on him and kicked his face, ridiculing him for being such a coward and not avenging his master. Simply touching the face of a samurai with your hand was considered a great offense at the time, so kicking Ōishi’s face was a much greater insult than whatever temporary physical damange it caused.

After it had been revealed that the cowardness and debauchary was just an act, and the ronin had both avenged their master and died honarably through seppuko instead of being executed like criminals, the man who had ridiculed Ōishi visited the Sengaku-ji temple where he begged for forgiveness before commmiting suicide. He was buried nex to the ronin.

The identity of the 47 rōnin

Wooden statues of the 47 rōnin are found in the temple.