The revenge of the 47 ronin has been the basis for many Japanese tv-productions, including everything from single episodes and mini-series to more extensive runs. One of the longer ones is the 52-episode television drama Daichūshingura (大忠臣蔵) which ran for the first time from January to December 1971, on the Japanese NET network. The series was shown on Tuesdays, on the 21:00 – 21:56 prime-time slot.

The series has been rerun numerous times since it first aired, and it nowadays also available for purchase in DVD-sets.

Daichūshingura features a lot of well-known and celebrated Japanese actors. Ōishi Kuranosuke was played by Toshiro Mifune, his wife by Yoko Tsukasa, and their oldest son Chikara by the kabuki stage actor Onoe Kikugorō VII.

Both Toshiro Mifune and Yoko Tsuakasa are chiefly known for their work with film. Among other things, Mifune did no less than 16 films with filmmaker Akira Kurosawa, including Rashomon, Seven Samurai, The Hidden Fortress, Throne of Blood, and Yojimbo. In Yojimbo (1961), he played against Yoko Tsuakasa who would later be cast as his wife in Daichūshingura.

Information about the 1971 tv-series Daichūshingura 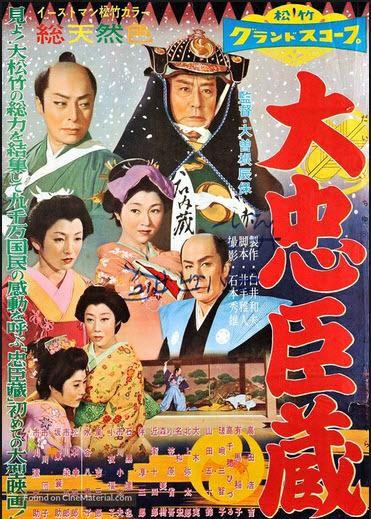